In July 2018, the Government announced Tranche 3 of the proposals to create Marine Conservation Zones (MCZ) around the coast of England. More information on exactly what is an MCZ can be found elsewhere in the newsletter.

This article concentrates on the two new proposals between Yarmouth and Cowes  and  off Bembridge on the Isle of Wight and how The Solent Protection Society (SPS) responded to the consultation. We responded where we were able, but some questions involved commercial financial data, or additional scientific evidence, which SPS did not have.

SPS supported both these designations as part of the Blue Belt initiative; however, we consider there is little, if any additional scientific evidence, to support restrictions on recreational use beyond the protections already afforded by existing designations.

We are concerned that Osborne Bay has been omitted from Tranche 3 but accept that the important sea grass beds (if more accurately mapped) could be protected by by-laws.

We questioned why Sea Pens has been listed as a feature off Bembridge as there is “low confidence”  that it exists or if it does, its extent. We see no basis for any restriction and  that the Special  Area of Conservation (SAC) under the Habitats Directive already gives sufficient protection.

Following earlier consultations SPS supported the sensible revisions to the zones now proposed. However, we consider that both Newtown and Bembridge Harbour should be omitted as these are already very well protected by existing designations and are both highly managed. Further designation is superfluous in our view.

Finally we were asked for any other general comments. SPS, while supportive of the proposed MCZs, were concerned that these should not restrict existing important recreational use.

For example under the designation Yarmouth to Cowes, “recreation” is not listed as ‘affected’ it should therefore be listed as ‘not likely to be affected’.  Where and if there is any evidence of damage by recreation, then sensible management and monitoring arrangements should be put in place with stakeholders. A blanket restriction would not be appropriate. This particularly affects sailing activity to the east of Yarmouth pier.

Similarly at Bembridge,  the RLNI use of a mooring in Priory Bay must be based on accurate surveys and sensible management.

SPS are supportive of the reintroduction of oysters into the Solent and would not want the MCZ to restrict controlled commercial development in the future.

Yarmouth to Cowes and to a certain extent Bembridge are important for Marine archaeology which these proposed MCZs would help to protect but should not restrict further investigation. 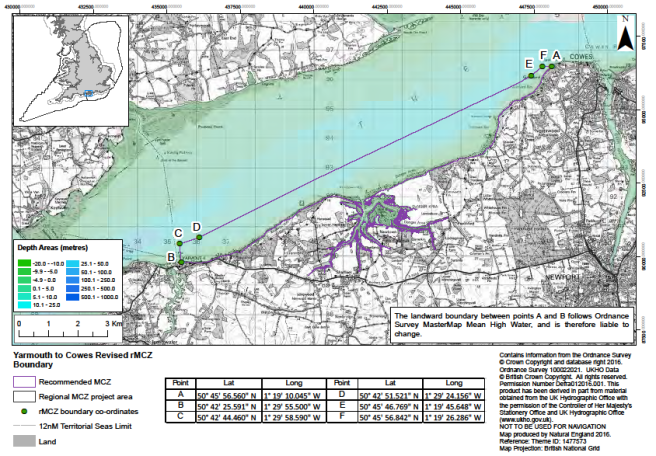 What would this site protect?

What would this site protect?

More information can be found at this link.

Admin account user for editorial use. View all posts by SPS Admin